There I was… happily working on assignments, with mind-numbing television, and a lovely electric fire for ambiance. Without warning, darkness descended. Damned ghosts, I thought (no pun intended).

I trundled downstairs, into the cavernous 130 year old basement to check out the electrical panel. Flicking breakers at random resulted in one room after another being rendered without power. “What is this mysteriousness*?” I wondered. As any modern social media addict will do, I ranted on Facebook. Within minutes, my phone rang. I answered, and the calling party hung up. Not too creepy, as I’m lighting candles all over my living room. The phone rings again. “Hello?” I answer, hesitantly. “Hi, it’s ____. Turn all your breakers off and get out of the house, now.”

After being convinced that if I stayed in my house I would die a fiery death, I made a few more phone calls. Being a holiday, the thought of the cost of a 24-electrician was frightening. Enter awesome neighbhourhood friend. After dismantling the electrical panel, this was discovered…. 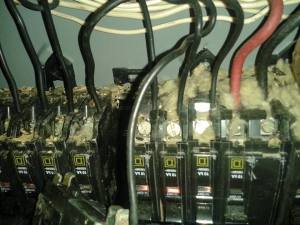 Food on one side, bedding on the other. Mice. Turns out the little buggers had been piddling all over my breakers for years. Ermiony (please see previous posts) managed to deplete my mouse population, but not soon enough. And, clearly, my six cats are seriously slacking. Everything was corroded, and every time I flicked a breaker off an then on again, I was breaking them. Everything dangerous and broken were shut off until further repair and I settled into a weekend of semi-darkness.

As has already established in previous posts, my favourite hobby lately is napping. Having the stress of school, and potential house explosions and/or fires, you can imagine how much I slept when I finally crashed. When I awoke the next day (no need to name a time, that’s just embarrassing) I discovered that I had cut power to houses within a 10 km radius. For four hours! It had to have been me. There’s no other explanation.

Turns out it was a coincidence… or so they tell me…